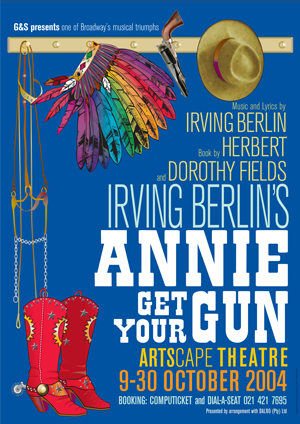 Annie Get Your Gun is a musical with lyrics and music written by Irving Berlin and a book by Dorothy Fields and her brother Herbert Fields. The story is a fictionalized version of the life of Annie Oakley (1860–1926), a sharpshooter who starred in Buffalo Bill’s Wild West Show, and her romance with sharpshooter Frank Butler.

The 1946 Broadway production was a hit, and the musical had long runs in both New York (1,147 performances) and London, spawning revivals, a 1950 film version and television versions. Songs that became hits include “There’s No Business Like Show Business”, “Doin’ What Comes Natur’lly”, “You Can’t Get a Man with a Gun”, “They Say It’s Wonderful”, and “Anything You Can Do.”